The most dreaded part of the year is fast approaching. For football fans the New Year does not represent a new start or turning over a new leaf but an agonising wait to see if your best players will be snatched by one of the ‘big four’. Worse still, your club will be constantly linked to a ‘world class’ player who never arrives, instead you stay up all night on deadline day in the hope that Levy has pulled off the deal of the century in bringing Messi and the like to Tottenham Hotspur F.C. and nearly smash the T.V. with the remote when you find out that Danny Murphy is in fact the con of the century. Rant over. 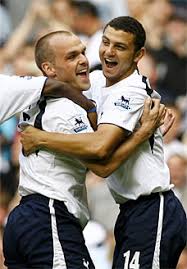 This Christmas however I’m more cautiously optimistic. This summer was unquestionably the best transfer window for Spurs since the window system was introduced. For once common sense and basic football knowledge prevailed and we filled three positions which we desperately needed to fill with quality. In Brad Friedel we now have a solid and reliable keeper who can actually catch and hold onto the ball, attributes that are generally looked for in most keepers but attributes that have been missing from the Tottenham penalty area for the past couple of seasons. It is also undeniable that Emmanuel Adebayor has brought something to the team with a decent supply of goals and a bit of height and bringing him on loan was a totally risk free option. However, he is unquestionably makes the top three in the ‘Laziest Man to Ever Pull on the Lillywhite Shirt’ Award (TM) although it is a distant second at best; Rafa, though I love him dearly, takes the title every time. It is also worth noting that Kyle Walker has been like a new signing, already proving himself to be the best right back since Stephen Carr and forcing his way into the England squad as a result. Also every time Ledley plays it feels like a £20 million signing, he is just immense.

And now onto Scott, the man who has already been elevated to captain and arguably our most indispensable player. It is no coincidence that after he arrived our performances have improved dramatically, no more screwing up winnable games up north (apart from Stoke), no more getting intimidated by bigger, stronger, more musculine men (apart from Stoke). He wasn’t just the buy of the summer but the buy of the decade. No one has been as instrumental the his teams displays, settled so quickly or worth so much more than £5.5 million. I may be a little in love with Scott (he has fantastic hair to factor into this as well, the best I’ve seen since Anderton) but his influence, both for Tottenham and indeed for England, cannot be exaggerated. You can really see why West Ham were so keen to keep him and any doubt anyone had about his ability to mix it with the best has been completely eradicated. Harry ‘I’m-not-a-wheeler-dealer’ Redknapp wheeled his best deal yet with Parker and secured two other key men for Spurs this season and it is for this reason I’m not too pessimistic about the New Year transfer window.

So onto the matter of who I want for Christmas. It is clear by our recent results that we have the first XI to challenge for a Champions League place if not better. However, depth is an issue. As the match against Sunderland showed any injury to Bale or Lennon eradicates any width. Townsend has potential but is still raw and lacks decision making in the final third; Rose has been used at left back for the most of the Europa League campaign and playing Modric, Van der Vaart and Kranjcar out wide has rarely worked. It’s best not to speak about Dos Santos. Redknapp’s wing back formation employed at Stoke was encouraging but is probably not a long term solution especially  when the problem of depth occurs again at right back with Walker existing as our only credible right/wing back. As well as a lack of depth out wide, Pav’s likely departure back to Russia would leave us seriously short of striking options if Adebayor was injured. It is clear therefore that we must strengthen down the right to provide competition and cover to Walker and Lennon as well as looking at cover for the left flank and up front.

Pros – Can play in both in both the right back and right wing positions and regular for the Italian national side with 14 caps to his name.

Cons – At 29 years old is he too old to make the transition abroad?

Pros – A more than capable defender able at covering both right back and central defence. Proven both in the Premiership as well as on the International stage.

Cons – Is unlikely to move to Spurs to warm the bench. Would Levy part money for a squad player who turns 30 next August?

Pros – Young and versatile he can play at both left back and left wing. He made his international debut at the age of 21 for Wales where he regularly plays down the same flank as Bale.

Cons – Was playing non-league football only 2 years ago at Wrexham and has had only half a seasons experience in the top flight.

My wish list for a striker was more difficult. Whilst it is a given that they need to be able to score goals, they need to have a bit about them physically, despite all the beautiful football we play, we are completely impotent when there isn’t a big centre forward leading the line. Proven goalscorers are in short supply and most ply their invaluable trade at Europe’s elite clubs, indeed in my opinion there are only two proven goalscorers outside of this bracket and that is Mario Gomez and Edinson Cavani. Both are goal machines, powerful and still young. You could argue that Gomez plays for one of the biggest clubs in the world and Cavani’s Napoli have a bright present and future both in Serie A and the Champions League. However, such is the draw of the Premier League and the progression of the club in the last few years it is not beyond the realms of possibility though both would command a huge transfer fee and would likely attract the interest of other Premier League rivals. So who else? Diego Forlan? One of the top strikers in Europe whilst in Spain he is now the wrong side of 30 and is struggling in Italy. Oscar Cardozo? A personal cult hero of mine as prolific in real life as on Football Manager and Fifa. However, he is unproven in one of the top leagues and is perhaps too old to make the move. Dimitar Berbatov? I’m sure we would welcome him back, I have seen few players with his talent at the Lane, but he is hardly the same player as he was when he left and turns 32 in the New Year.

This is hardly going to be popular on a lilywhiterose but one could argue we would only have to look across London to find two potentially interesting and entirely realistic solutions. Chelsea’s indifferent form and a new regime has clearly unsettled Didier Drogba and Fernando Torres, formally two of the most dangerous strikers in the world. Drogba is now 33 but still capable of playing at the highest level for a couple of seasons yet and on his day unstoppable. He is clearly looking to move sooner rather than later and, barring wage costs, would be relatively cheap. However, his ‘days’ are becoming few and far between, his motivation for football is on the wane and is probably looking at one last big pay day in Russia or the Middle East. Fernando Torres is an entirely different proposition. He isn’t a shadow of the player he once was, he wouldn’t be fit enough to clean the shadows boots. His value has fallen by half an if the rumours are true Chelsea would be grateful for £20 million. And yet, and yet…I would personally raise £20 million to see Torres at Tottenham. He is only 27 and that talent does not simply disappear, especially when you have as much talent as that man has. It may sound simplistic but he has the look of a man who needs an arm round his shoulder, and we have the manager who epitomises man management. Whether Chelsea sell him would be a different issue but there are few other clubs that would touch him. Man U and City are not exactly struggling in the striking department and Liverpool would be an unlikely destination for obvious reasons. Then in Europe the few elite clubs that would be able to afford him aren’t too shabby up front either and I can’t see him going to PSG or Russia or the Middle East at his age unless he too has given up.

So too sum up all I want for Christmas is Fernando Torres, I believe he is the player that will win us the League never mind qualifying for the Champions League. Failing that I would like to see a Grant Holt and Jonathan Walters pairing up front in the New Year. With Lennon and Bale supplying them they will score 50 headers between them. I genuinely think that failing getting Torres to strut his stuff at the Lane, Holt and/or Walters could be our missing ingredient.